Lin has lived in the village of Wells since she was a child. Now in her 80s, she knows the community inside and out—and has strong opinions on how to make it better for adults who are aging in place, like her.

Wells knows the value of the opinions, experience and input its older population provides.

“For a small community like Wells, keeping [older adults] in the community becomes even more important, because that’s a lot of our community history, it’s volunteerism, traditional knowledge, it’s the life of our local non-profits,” says Wylie Bystedt, Marketing and Community Economic Development Coordinator for Wells.

The community of just over 200 put that knowledge to work in recent years, when it embarked on its Age-friendly assessment. The Age-friendly Action Plan that emerged presented the ideas and input of the community back to them in a clear and strategic way, providing a number of pathways towards becoming more age friendly. In 2017, when the opportunity came to apply for Stream 2 Age-friendly Communities Grant funding that could bring some of those plans to life, Wells picked strategically.

“We looked through that work and picked a couple of things that we knew we could manage, that would make a difference, at a price point we could handle,” says Bystedt.

Wells’ proposed project includes two components to help keep older adults out and about in the community: snow clearing for the winter, and bench installation for the summer. In keeping with the community’s response to input, both have prioritized community input. For example, in late 2018, the community met with pins and markers in hand to sketch their daily walking routes onto large maps of the Wells area, sticking pins at the points on the routes where they felt they might need to take a rest in order to determine where benches would be installed in spring and summer 2019. 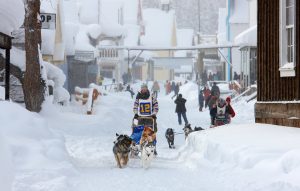 Contestants in the annual Gold Rush Trail Sled Dog Mail Run race through the streets of Wells, BC. The community sees an average annual snowfall of 4.8 metres, meaning a snow-clearing project is seen as having the potential to make a significant difference in the lives of older adults in the community. Photo credit: Flickr/Province of BC.

Far from being a consultant’s community engagement tactic, Bystedt said the activity simply seemed to be the best way to capture the data in the small community.

Bystedt says that the success of the snow-clearing project, which wrapped up in early 2018, was also attributable to the strength of networks and relationships within the community. One of the program’s most valuable partners proved to be the community paramedic, who, through the nature of her work, was aware of older adults in need of snow clearing and was able to refer them. Bystedt calls this a “gateway partnership”—one that allowed each party to see the potential of working together, potentially leading to other successful partner projects.

“What we heard was that [older adults] were taking advantage of the snow clearing—during the winter months, they were, in fact, able to get out and go to the library, go to the seniors meetings, go to the local coffee shop. So what happened is that the businesses and other local groups who provide services didn’t see a diminishing number as winter set in.”

And most importantly, Bystedt says that the project and the process leading up to it made older adults feel listened to, valued and included.

“It made them feel included, that we actually had paid attention to their feedback and had done something with it,” says Bystedt.

Wylie Bystedt’s recommendations for communities looking to take on a similar project: