Exploring the role of power in equitable community engagement

Jacob Cramer is a Researcher & Planning Assistant with BC Healthy Communities.

As a society working to reduce systemic inequities, our systems should work to fairly redistribute opportunity, resources and power. Currently, community engagement processes are building a system which tries for fair opportunity, but often neglects to distribute power and resources. As planners and public health practitioners who use public participation as a tool in our practices, we should recognize that equitable opportunity to participate is not the same thing as granting community members the power and resources they need to effect change

In 1969, Sherry Arnstein warned about the creation of a troubling community engagement system; one that was not built on affecting the outcome of the process, but rather that served as an empty ritual for participants.1 The Institute of Development Studies’ Participatory Methods blog describes Arnstein’s concerns aptly:

At the lowest end of the ladder, forms of non-participation are used by powerful actors to impose their agendas… participants hear about interventions and may say something about them, which power holders denote as ‘input’. However, the voices of participants will not have any effect on the intervention; thus participation does not lead to change.”2 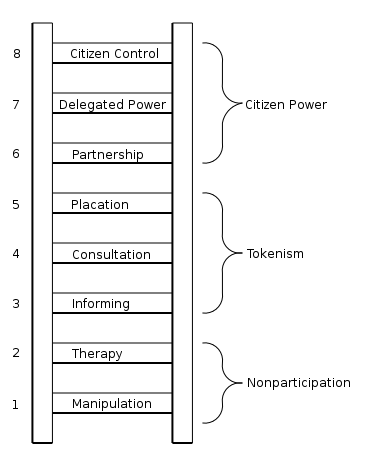 Equity is the fair distribution of opportunities, power and resources to meet the needs of all people, regardless of age, ability, gender or background.3 Importantly, all three contribute to society becoming more just. However, equitable redistribution of power is key in giving people the capacity to alter systems and build a future where equal opportunity and resources are ingrained.

During an IAP2 course I took earlier this year, we spent a good deal of time identifying equity-seeking groups that may be hard to reach, and discussing ways community engagement processes can reduce barriers and ensure these voices are heard. This is incredibly important, but it only addresses the fair distribution of one of the elements of equity—opportunity—among community members.

It is important to critically consider the other two pieces involved in equity—power and resources—because in its current approach, focusing only on the opportunity aspect of equity, community engagement may contribute to a systemic widening of power imbalances. When not designed to give community members enough power to meaningfully impact the outcome and equitably share in the resources being deliberated on and distributed, community engagement processes can, and often do, maintain the status quo. Projecting equitable community engagement as the pinnacle of what we—as Healthy Communities practitioners—are aiming for, sets a false target and detracts from actually empowering our communities.

The notion that community engagement could be ineffective—or even erode equity—may seem surprising; after all, IAP2 has a spectrum of engagement with terms like collaborate and empower. It’s true; it does, and these are great ideals. Yet standard community engagement practice is that the engagement experts and sponsoring organizations decide what level of participation is appropriate. This cements the ability of those with the power (i.e., engagement experts, elected officials and land developers) to continue to hold the power. It emboldens an illusory form of community engagement that Arnstein describes as an empty and frustrating process for the powerless.

By allowing those in power to determine the worth of the public’s participation, even inclusive community engagement processes can withhold the sufficient power community members need to improve the outcome themselves. As shown by David Brooks’ reporting from Compton, California, much of the community’s resurgence is due to its ability to govern itself; for decisions to be made by people who “really know what’s going on.” In instances where the empowerment level of engagement is used, the choice to share power is not systemic, and it can either overtly or covertly be a tactic to engineer complacency or support elsewhere, for other projects.4

Much energy is spent on consulting with Indigenous communities in order to bring their voices to the table, but time and time again we see public participation does not lead those in power to honouring the choice of those who are most impacted by the decision. To avoid this, greater sharing of power must be built into decision-making systems, not left to public participation processes where discretion remains in the hands of the powerful. One example of replacing opportunity to participate with actual sharing of power comes from a recent decision by the Capital Regional District to work toward including First Nations on committees, select committees, commissions and board-appointed bodies. Unfortunately, as the article alludes, colonial structures and systemic discrimination in existing legislation make this an uphill battle.

With this understanding, I was not surprised that during my IAP2 training in B.C.—where 95% of land is unceded5—conversation and teachings struggled to wade into best practice for reaching and engaging Indigenous communities. As Haisla Chief Councillor Ellis Ross expresses, being involved doesn’t just mean having a say. Indigenous peoples and communities don’t deserve anything less than empowerment. Empowerment respects Indigenous peoples’ right to self-determination; public participation processes cannot offer that.

Community engagement has the potential to be a system that can represent and advocate for fairer opportunities to redistribute power, improving socio-economic and health outcomes equitably. It can do this by recognizing the power of equitable community engagement in bringing traditionally silenced community members together in order to learn, organize and build their capacity to successfully advocate for themselves and claim a slice of the power pie. If community engagement’s sole aim is to create an equitable table, it will continue to serve as a tool for the powerful; an illusory form of change. This nearly-unattainable goal—an equitable choir of voices—distracts from the actual objective of transformative community planning, which is to redistribute resources by first redistributing control over those resources. All communities are in different places, and equitable opportunity to participate is still needed, but it is important that Healthy Communities workers recognize that equitable participation is not the end goal; equitable ownership of power and resources—true empowerment—is.