Looking out for tomorrow: Cranbrook plans for future Age-friendly needs

“The team that came together was absolutely great—it was unbelievable. Everybody pulled together, everybody believed in this.”

Sarah is a woman in her late sixties living in Cranbrook, BC. After raising a family in the nearby village of Wardner, Sarah recently relocated to the city in order to be closer to medical services as she ages. Sarah is not alone: in the past few years, the town of Cranbrook has experienced considerable growth in their older adult population, as many people from nearby small towns and rural areas make the decision to move closer to the city, which serves as a hub for medical services across the Kootenays.

Fortunately for Sarah and others like her, the City of Cranbrook is taking steps to ensure that the city is ready to meet the needs of her demographic, which is projected to make up 41% of Cranbrook’s population by 2035. The city has recently released their Age-friendly Community Action Plan, a document which will help the city set priorities and lay out the next steps towards ensuring the city is safe and welcoming for older adults.

Doug Newberry, Vice-Chair of the Cranbrook Age-friendly Advisory Committee, says the decision to embark on the Age-friendly Community planning process was the result of the city choosing to respond proactively to the situation, rather than a response to an immediate crisis.

“That was the idea behind the whole thing,” says Newberry. “The simple fact of where are we today, and where do we need to go to get to tomorrow and make sure everything’s covered?”

Cranbrook Mayor Lee Pratt says the project was a natural fit for the direction the city has been moving in recent years.

“When the City was approached by the Age Friendly Committee, we were excited to be a part of it,” says Pratt. “We had been discussing plans to make Cranbrook a more healthy and active community and have other initiatives already in place. This was a natural fit and we look forward to continued participation with our local committee.” 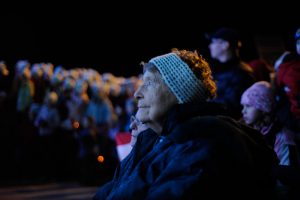 Citizens of Cranbrook gather to watch the Olympic Torch as it passes through the city in 2010. Cranbrook is committed to working towards being a healthy and active community for people from all walks of life. Its recently-released Age-friendly Community Action Plan lays out concrete strategies for ensuring this includes its older adult population. Photo credit: Province of BC/Flickr.

Cranbrook’s approach is unique in that unlike many communities, they chose to move forward without a consultant. Newberry says for other communities looking to go this route, the key is to put together a committee of passionate stakeholders from across the health and community sectors.

“The team that came together was absolutely great—it was unbelievable. Everybody pulled together, everybody believed in this,” says Newberry. Members from Interior Health, the City of Cranbrook, the Rotary Club, the United Way, Better at Home, Canadian Association of Retired Persons Chapter 29, Caregivers Network of East Kootenay, Seniors in Partnership, East Kootenay Child Care Resource and Referral, and the Seniors Hall brought their expertise, connections and perspectives together to move through the process quickly. “We haven’t wasted a lot of time. Our meetings are an hour—and that’s it. And we’ve got a lot of work to do in that hour.”

Cranbrook wrapped up the survey consultation component of their plan earlier this year. If there was any doubt that the community was ready and eager for this, it was erased when the final numbers for the survey came in: 719 responses—more than double the sample size required to establish validity. Newberry says they gained an incredible amount of insight from the results.

“A lot of those responses gave us some good insight and ideas to incorporate into the Action Plan,” says Newberry. The committee also recognizes that many of the measures the city can take to make Cranbrook more liveable for older adults will also benefit other community members. “What works for adults and walkers works for strollers and parents as well,” Newberry reflects.

Now that the Action Plan and final report [PDF] have been released, the city is looking at implementation options—they’ve applied for the next stream of Age-friendly Communities Grant funding to support implementation of the plan through a community communication strategy. In the meantime, Newberry says that the most fundamental shift so far has been the opening of dialogue between the public and the city through the committee.

“One of the changes that we’ve seen so far is the communication that’s been opened up—people like to be listened to, and people are coming forward with their ideas.” says Newberry.

Doug Newberry’s recommendations for communities looking to take on a similar project:

“[Our coordinator] does a lot of the legwork, and we’re very fortunate to have her. She went to a lot of the restaurants where [older] folks hang out, and it was only by engaging them by that means that we were able to get that [survey turnout],” says Newberry.